The Horsley board can be used with various methods for example when queen cells have been found, move the old hive to one side. Place a new stand/floor and brood box complete with frames and foundation (or empty comb) in the place of the old one. Flying bees returning from the field will immediately start entering the new hive. This reduction in numbers of bees in the old hive will make finding the queen easier. 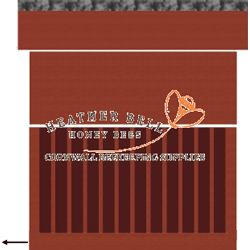 This is how the hive might look at the start with the entrance at the front although there may be more than one brood box being used and more than one shallow. To keep the examples simple the presumption is made that the deep box only contains brood and the shallow only contains either honey or a feeder. This is referred to as the ‘old’ hive.
Remove a frame from the new hive and transfer in one comb containing mainly or at least some newly hatched young larvae from the old hive. It is essential that this comb does not contain any developing queen cells; it would defeat the whole purpose of the operation so double check and destroy any that are found. If there are any empty combs in the old hive, transfer these across too where they can be used by the queen for egg laying. Transfer or release the queen into the new hive if she is not already there. A queen excluder (optional) and any shallow boxes (ensure they contain no brood) are then placed on the new hive.
Remove the slide from the Horsley Board. The board is then placed on top with the entrance uppermost and facing the opposite direction to the main hive entrance. The entrance must be closed.
The old brood box(es) are then placed on the Horsley Board. Replace the crown board and roof and provide 50% syrup if there is no nectar flow.
Manipulation and cover cloths will help to keep the bees controlled especially if the weather is not ideal. They are very useful when the queen cannot be found quickly and boxes are open for longer.
Over the next 3-4 days older flying bees above the Horsley Board will find their way down through the queen excluder. This reduction of population in the top box will encourage the bees to tear down excess queen cells reducing the chances of a swarm departing when the first new queen emerges.
After this period insert the slide in the Horsley Board which blocks the queen excluder. This isolates the bees in the top box from the queen and prevents the transfer of her pheromone from the bees below so the bees above sense their queenlessness, encouraging them to continue to produce a new queen.
The mesh panel is screened on both sides of the board which also prevents the transfer of queen pheromone from the bees below but allows through ventilation and the distribution of colony odour which facilitates reuniting later.
Any older flying bees remaining in the top box will leave by the new entrance but will return to the old entrance. This further reduces the population of the top box and should ensure that a swarm will not depart when the first new queen emerges. Do not disturb for 4 weeks by which time there should be a newly mated queen laying in the top box.
The old queen can now be 'retired' (removed) and the colony can be reunited by simply removing the Horsley Board, placing the top box on the bottom box and any shallow boxes on top. No precautions to reuniting such as newspaper are needed because the top and bottom boxes retain the same colony odour. If the old queen is not removed there is a small chance that the new queen can be rejected or killed by the old queen although more often the bees will sense and accept which queen is the best.
Alternatively, instead of removing the Horsley Board, it can be reversed so the entrance is on the same side as the bottom entrance. Both the old and the new queens can then be maintained as a Two Queen System until the end of the season when they can be reunited as above. 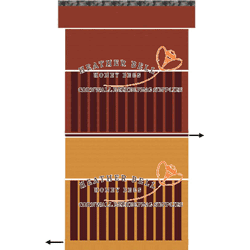 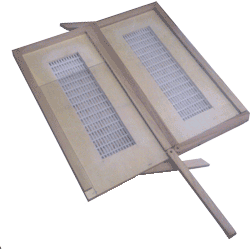