There are many different regional bee hive designs with even more variations.
As with every aspect of keeping bees, to say there is more than one way of doing things is an understatement so the choice is mainly a matter of personal taste. 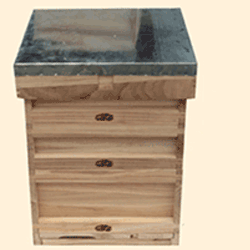 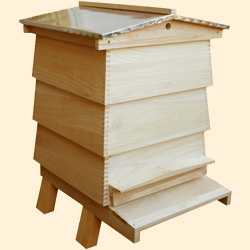 The W.B.C. Bee Hive is the original, iconic British beehive design dating as far back as the 19th century. It has a double wall design with an outer case and inner boxes which is considered less easy to use and less practical for some. The boxes are different to a National standard bee hive but it uses the same National bee hive frames. 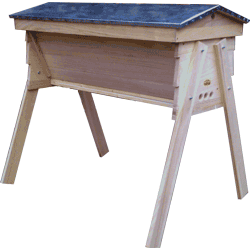 The Cornish Top Bar Hive and the Warré Bee Hive are alternative methods of keeping bees without frames or foundation. It is a primitive method of management though by its nature it is considered less easy to use and less practical for some.
NOTE: You may be starting out with one bee hive and one colony of bees but be prepared to eventually keep at least two in an apiary. There are good reasons for keeping a minimum of two colonies.

Therefore our advice is to start with a National bee hive as a first bee hive then have a W.B.C. bee hive as a second hive if that is what you fancy, the frames are interchangeable, or a top bar hive which requires no frames anyway.

All Copyright is Reserved and Protected © 1999 - 2020 Heather Bell Honey Bees - Cornwall Beekeeping Supplies - You are agreeing with our Terms & Conditions of using this information.